French-Swiss link to reopen in December 2018

FRENCH infrastructure manager SNCF Network has confirmed that the 22km Belfort - Delle line, which has been closed since 1992, will become operational again at the timetable change in December 2018, creating a further connection between the French high-speed and Swiss railway networks. 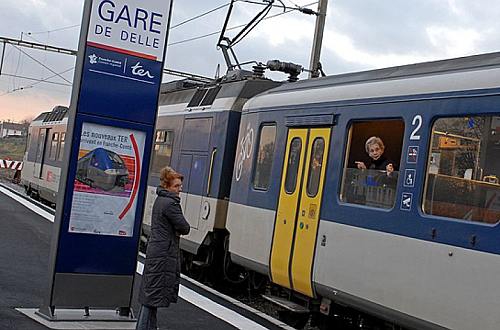 The link will provide a connection from the TGV station at Belfort-Montbéliard in France via Delémont and Biel in Switzerland to the Rhine-Rhône high-speed line. In addition, five intermediary stations will reopen on the route providing communities on both sides of the border with improved local and cross-border transport.

Construction on the €110m project began in September 2015 and has involved rebuilding and electrifying the single-track line. Currently work is underway to lay new track and catenary with construction work expected to be completed by summer 2018 at which point trial operations will start on the line.

Once completed, the journey time between Belfort and Delle will be 25 minutes, while Belfort city centre will be linked to the TGV station in just 10 minutes. A 1h 43min journey time is envisaged for Belfort - Biel/Bienne services.