AN INTERNATIONAL group set up to promote the development of an S-Bahn network encircling Lake Constance has called on the governments of Switzerland, Austria, and Germany to invest in track-doubling and electrification in order to make the project a reality. 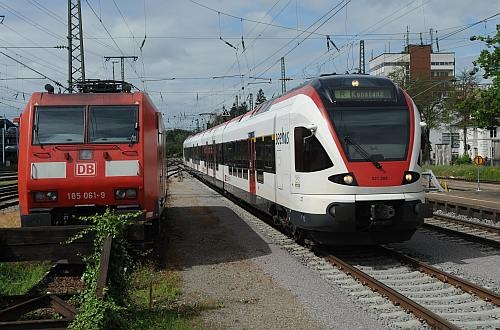 The Lake Constance S-Bahn Initiative (IBSB) has written to transport ministers in the three countries urging them to consider upgrading routes along the northern and southern shore of the lake to provide capacity for half-hourly regional services. IBSB proposes setting up a joint infrastructure fund involving national, regional and local governments.

As well as funding, the IBSB is also calling for much closer integration of fares and train operations around the lake. The group argues that the allocation of responsibilities is currently so complicated that it is almost impossible to develop a coherent vision for the regional rail network.

At present most of the German section from Lindau to Friedrichshafen and Radolfzell is non-electrified and single track. The Lindau – Bregenz (Austria) – St Margrethen (Switzerland) and the Konstanz – Romanshorn – Rorschach lines are electrified, but are also largely single-track. IBSB says the current infrastructure is one of the largest obstacles to implementing the S-Bahn project.

The group suggests that the project could qualify for European Union funding as part of the Interreg IVC programme, which seeks to encourage regional co-operation across national borders.