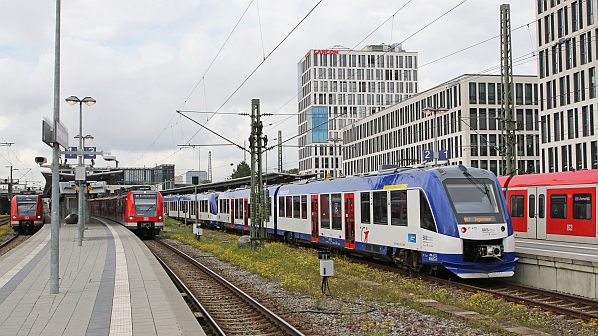 ANNUAL figures published by the German federal statistics service Destatis show that overall passenger numbers in Germany fell by 4% in 2021 to 7.9 billion compared with 2020.

The figures also show that distances travelled fell by 4% to 96.9 billion passenger-km. In both cases these figures represent a drop of around a third compared to the pre-pandemic situation in 2019 and are the lowest recorded since Destatis began collating detailed figures in 2004.

Destatis says that the fall in usage, compared with 2020, can be attributed wholly to the first quarter of 2021 when a work from home mandate applied across Germany. Compared with 2020 all other quarters showed passenger growth.

Overall rail usage was down by 6% with 1.671 billion journeys made, while light rail and metro usage were down 5%.

Destatis also published final figures for freight modal split in Germany for 2020, which show a 3.7% decline across all modes compared with 2019, in large part due to the first wave of the Covid-19 pandemic.

The figures also confirm the long-term trend of road transport’s growing market share from 71.6% in 2005 to 74.6% in 2020, although figures suggest that this at the expense of waterborne traffic.

The German federal government has previously set goals to transfer freight traffic from road to rail and inland water. In late 2021 the government set the objective of increasing rail freight’s market share to 25% whilst also doubling rail passenger numbers, both by 2030. To incentivise this, tolls for trucks, already paid on highways by medium/large HGVs, will be widened to cover all trucks and some vans other than those delivering within a 50km radius of an intermodal terminal.