A consortium of Stadler Poland and Stadler Bussnang has been awarded a contract by Austrian-Hungarian operator Györ-Sopron-Ebenfurth Railway (GySEV) to supply 10 four-car Flirt 3 EMUs for regional services in western Hungary. 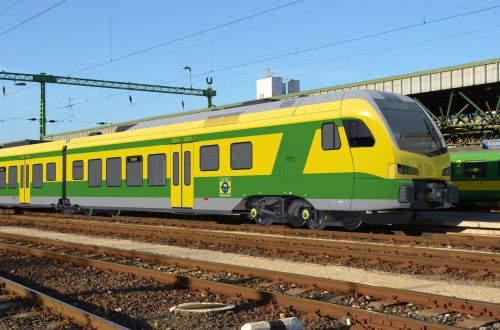 The 25kV ac 50Hz trains will complement GySEV’s existing fleet of 10 Flirt EMUs, which were delivered in 2013-14 and currently operate on the Sopron - Szombathely -Szentgotthárd, Sopron - Győr and the Szombathely - Rajka lines.

At 77.1m, the new trains will be 2.8m longer than their predecessors and seat up to 208 passengers (compared with 200 on the existing Flirts), including 14 on folding seats. The 120km/h trains will be capable of acceelerating at up to 1.2m/s2.

Deliveries will take place between March 2018 and January 2019. All 40 bodyshells will be fabricated at Stadler’s Hungarian plant in Szolnok, with final assembly taking place at Stadler Poland’s Siedlce facility.

The Stadler order is part of a broader programme of investment in new locomotives and rolling stock by GySEV. In July Siemens handed over the first of five Desiro ML trains for Deutschkreutz - Ebenfurth - Vienna - Petrzalka and Pamhagen - Vienna services. GySEV has also submitted a €40m loan application to the European Investment Bank to finance an order for new locomotives.