A new direct rail link between Helsinki and Kouvola would reduce journey times between the capital, southeast Finland and St Petersburg but is not economically viable, according to a report published by the Finnish Ministry of Transport and Communications on April 5. 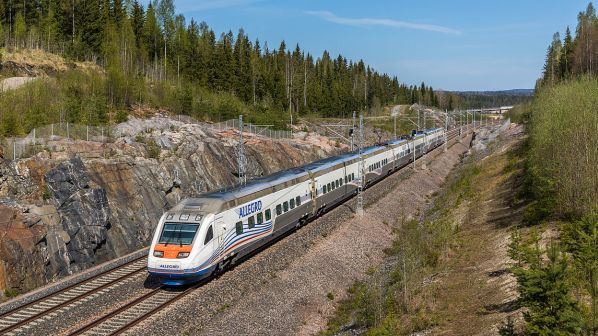 In autumn 2018 transport and communications minister, Mrs Anne Berner, established a commission to investigate the construction of a new 106km line from Helsinki to Kouvola via Poorvoo, which would be 27km shorter than the existing route via Lahti.

With a 220km/h line speed, the journey time for Helsinki - St Petersburg services could be reduced by nine minutes. A 15-minute reduction could be achieved if the infrastructure was built for 300km/h operation.

Helsinki - Kouvola passenger numbers would be 9% higher in 2050 than in the no-build scenario. The town of Poorvoo, which is currently isolated from the passenger rail network, would benefit from a 33-minute journey time to Helsinki, compared with 55-65 minutes for the current bus trip.

According to an indicative preliminary estimate from infrastructure manager Väylä, the new line would cost €1.7bn, with a cost-benefit ratio of 0.13. While the line would help to reduce carbon emissions and stimulate higher demand for rail transport in the region, the ministry says that according to currently available information, the project “would not be economically viable.”

The report says state funding would not be sufficient at the current level to enable implementation of the project, although it may be possible to develop the scheme using the project company model in partnership with regional stakeholders.