SWEDISH National passenger operator SJ has abandoned plans to launch hugely-improved services on the Oslo – Stockholm route because Norwegian infrastructure manager Jernbaneverket is planning more than two years of daytime closures on part of the route for infrastructure work. 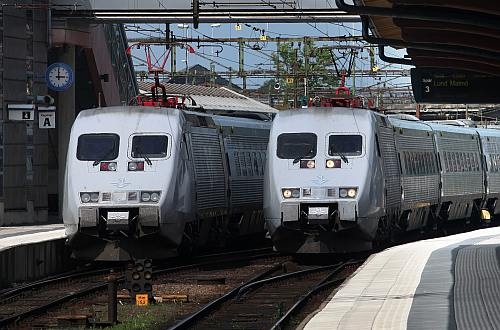 SJ announced in January that from August 9 it would replace the two daily Inter-City services between the Swedish and Norwegian capitals with three X2000 services, reducing the journey time for the 572km trip from 5h 38min to around four-and-a-half hours.

However, SJ says these plans are no longer viable because Jernbaneverket plans to carry out catenary renewals on the Lillestrøm – Kongsvinger line from mid-2016 onwards. Sections of the line will be closed between 09.00 and 14.00 over a two-and-a-half year period from mid-2016. This would affect the morning departure from Stockholm and the midday train from Oslo.

SJ says it had already spent a substantial sum on planning, staff training, and rolling stock refurbishment before it was informed of Jernbaneverket's plans.

The proposed works will also affect Värmslandtrafik cross-border regional services, which are operated by Tågkompaniet.

Jernbaneverket says electrification equipment on the route dates from the early 1950s and is in urgent need of replacement. Daytime closures are preferred due to the high levels of night time freight traffic.

"We are not happy that this will lead to the cancellation of some trains, but we have chosen to protect morning and evening commuter traffic as well as freight trains," says Jernbaneverket traffic director Mr Bjørn Kristiansen. "We are still in dialogue with SJ on traffic arrangements for the route."

Jernbaneverket says the work is being carried out at short notice because the Norwegian government has made additional funds available to address the infrastructure manager's maintenance backlog.