WESTPHALIA-Lippe Local Transport (NWL) has selected Keolis for a contract to operate the Teutoburger Wald regional network in northwest Germany from December 2017, which will become effective from December 2017. 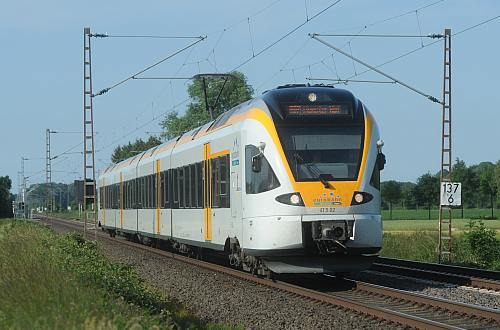 The contract is due to be signed by November 17 and covers the operation of around 5.3 million train-km per year on four lines, which are currently operated by German Rail (DB) and Westfalenbahn:

Operating under the Eurobahn brand, Keolis' bid pledges improvements in train services, higher frequencies and increased seating capacity. Half of services will have a conductor on board, including all services operating after 19.00.

Keolis will use the Stadler Flirt EMUs already operating in this area, although dedicated rolling stock will be needed for the hourly cross-border services into the Netherlands and these trains will need to be capable of operating under 15kV ac and 1.5kV dc electrification systems.

Keolis plans to use eight Flirt 3 train sets for the German- Dutch train services, which will be procured through leasing company Alpha Trains. This will be the same type of Flirt which will be used by Abellio on Düsseldorf – Arnhem cross-border services from summer 2017.

Keolis already has an operating license for the Netherlands through its Syntus subsidiary At present the Keolis Eurobahn regional service from Hamm to Venlo operates under the Syntus license on the short Dutch section of this route.