PROPOSALS for the expansion and modernisation of Northern Ireland's railway network have been revealed in a new 20-year strategy which was launched by Mr Danny Kennedy, Northern Ireland Assembly minister for regional development, on May 19. 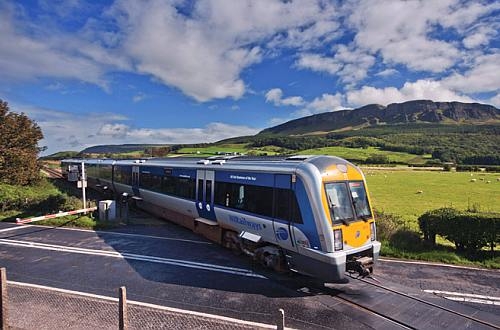 The Railway Investment Prioritisation Strategy states that the first priority for 2015-2035 should be to maintain and improve the passenger capacity of the existing network, which has seen passenger numbers surge from 6.7 million in the 2001-02 financial year to almost 13.2 million in 2013-14, but it also proposes investment in new lines.

Northern Ireland Railways (NIR) says that over the next 20 years it will need to complete track upgrading on the on Coleraine – Londonderry line and relay track on much of the remainder of the network.

In order to accommodate growth, NIR is considering the procurement of new trains, which would supplement the recently-acquired fleet of class 3000 and 4000 DMUs. Up to 60 vehicles could be procured at a cost of around £100m, enabling the operation of six-car trains. The report says that NIR is pushing for early implementation of its "New Trains 3" project, although the government says procurement may need to be phased due to budgetary constraints.

The 17-year-old fleet of diesel-hauled trains used on Belfast - Dublin Enterprise services is also undergoing refurbishment, although the report notes that NIR and Irish Rail (IE) will need to look at options for replacement in the next decade, which could include electrification.

Proposed infrastructure developments include construction of a third track on the Belfast – Lisburn line between Great Victoria Street and Adelaide, track-doubling on Dargan Bridge, and a third track between Lagan Junction and Belfast Central. Stations will be refurbished and new park-and-ride facilities will be built.

The report also looks at enhancements to reduce journey times and allow more frequent services between Belfast, Coleraine, and Londonderry. These could include track-doubling on the line between Bleach Green and Antrim or reopening of the Antrim – Knockmore/Lisburn line, which was mothballed in 2003.

The reopening of this line could be implemented in conjunction with a new rail link to Belfast International Airport. Other potential candidates for reopening identified in the report include Antrim – Castledawson and the lines to Armagh and Dungannon.

"It will be important in the present period of public expenditure restraint to use existing resources to sustain and make best use of the current system where there is greatest potential for growth," says Kennedy. "However, my ambition for rail goes much further and I am absolutely committed to seeking opportunities to further enhance or extend the network."

The report notes that any expansion of the network is likely to require an increase in funding. The Northern Ireland Executive currently allocates a railways a capital grant averaging around £44m per year, and if this level is maintained after 2015 it would equate to potential expenditure of £880m at 2014 prices between 2015 and 2035. However, it is estimate that £620m would be needed over this period to maintain existing infrastructure and rolling stock, limiting the resources available for expansion.

The full report can be viewed on the Northern Ireland Executive website.