DESIGNS have been unveiled for an expanded station at Ourense, in northwest Spain, by architects Foster & Partners and Juan Cabanelas. 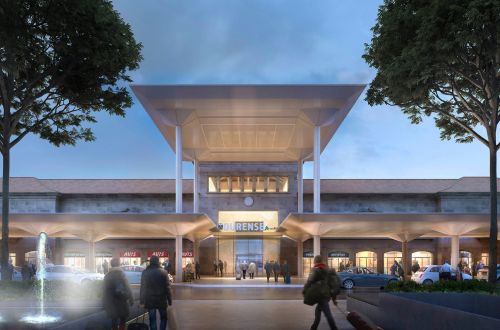 Ourense is at the southern end of the broad-gauge high-speed line from Santiago de Compostella and is an important junction for lines to Madrid, Leon, A Coruña, and Vigo. A high-speed line is under construction from Ourense to Zamora to connect with the existing high-speed line to Madrid.

The design of the upgraded station caters for the increased passenger numbers while creating a new transport interchange. It includes a direct connection with the adjacent bus terminal, a new urban square in front of the station, and a pedestrian walkway and public park over the tracks.

Concrete plates on slender columns provide shelter from Ourense’s abundant rain and high temperatures in the summer. The modular roofs will require minimal maintenance while allowing for future growth, and a new portico includes cafes and shops.

The proposed bus station, which is outside the remit for the station, will be relocated closer to the western side of the railway station, and there will be a new underground car park, and pedestrian walkway over the tracks to the east.

Routes for passengers have been simplified to create an intuitive path through the station. A direct internal connection to the bus station will provide easy links to the city centre and the surrounding areas.

Aerial view of the expanded station at Ourense.