A planning agreement for the upgrading and electrification of the Chemnitz - Bad Lausick - Leipzig line was signed on September 7 by Mr Martin Dulig, transport minister of the state of Saxony, and Mr Eckart Fricke, group representative of German Rail for Saxony, Saxony-Anhalt and Thuringia. 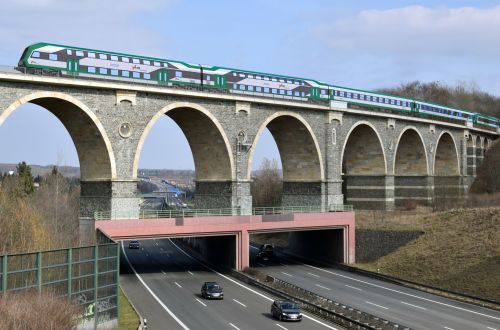 An interim rolling stock solution has been developed to increase capacity and improve service quality before route modernisation is completed. ZVMS

DB announced in June that it had given the go-ahead for the project, which is being upgraded to a priority scheme in the Federal Transport Infrastructure Plan.

Preliminary planning was completed in 2014 and Saxony has allocated €10m in its current budget to take the scheme forward.

The upgrading of the line is a prerequisite for the reconnection of Chemnitz and southwestern Saxony to the German inter-city network.

An interim concept for short-term service enhancements on the route was unveiled by Central Saxony Transport Authority (ZVMS) in July. Under these plans, rolling stock currently used on regional express Line RE 6 services will be replaced by trains formed of both single-deck coaches and more modern double-deck coaches. This will raise capacity to 350 seats, an increase of 50 seats compared with the current trains, while offering improved facilities such as passenger Wi-Fi and wheelchair-accessible toilets.

The transitional concept, which is due to be rolled out from the first quarter of next year, also includes localising train maintenance in Chemnitz and the introduction of a direct Chemnitz - Berlin service.