Second track for Lötschberg Base Tunnel

SWITZERLAND's second-largest railway company BLS is to issue a public tender for a contract to lengthen the double-track section of the Lötschberg Base Tunnel. 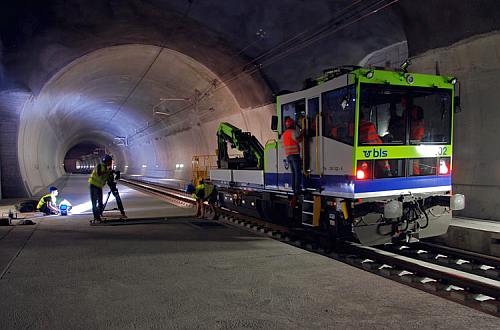 The 34.6km tunnel was opened in 2007 but in order to bring increasing costs under control only a single track was installed on the 21km stretch between the northern portal near Frutigen and the southern crossover between the running tunnels at Ferden.

However, the long section of single track has become a bottleneck, severely limiting scope for the expansion of passenger and freight services and inflating operating costs.

The Swiss government has already allocated funds to plan the completion of railway infrastructure between Ferden and Mitholz by 2025 under the Fabi scheme for financing and upgrading Switzerland's railways.

Planning work is due to start in 2016, and will include options not only for the installation of the Mitholz - Ferden section but also for completion of the final section of the tunnel between Mitholz and Frutigen.