SPAIN’s minister of development, Mr Iñigo de la Serna, has announced an investment of €660.6m to increase the capacity of Madrid Puerta de Atocha station and alter the track layout at Charmatín station. 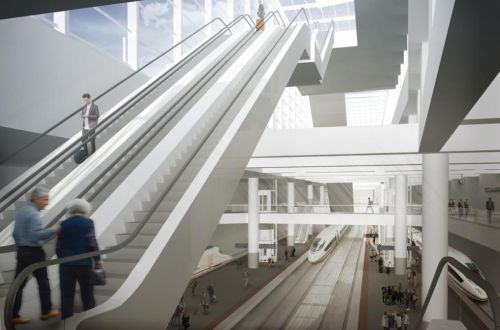 Two new 420m-long island platforms with four standard-gauge tracks will be constructed beneath tracks 14 and 15 at Atocha station and Méndez Álvaro Street.

The project was originally approved in 2008 but was shelved in 2012 due to Spain’s economic crisis. The delay means that when the €332m standard-gauge tunnel linking Charmatín and Atocha, which is currently being tested, opens, high-speed trains will not be able to stop at Atocha until the new platforms are completed in 2023. When this has been achieved, Atocha will become the hub of the national high-speed network.

The work at Atocha will also increase the capacity of the station, which was used by 22 million people last year, to 40 million. In addition, a new entrance hall will be constructed, and the existing concourse will be remodelled to improve pedestrian flow and access to the platforms.

The work at Atocha will cost €423m while the track alterations at Charmartín will cost €237.6m. In addition, two extra tracks have been laid between Atocha and Torrejón de Velasco at a cost of €646.5m.

At present standard-gauge high-speed trains travelling between Charmartín and Atocha use one of the two existing broad-gauge cross-city tunnels linking the two Madrid stations, which requires the trains to pass through two gauge-changing devices, a time-consuming process.

The ministry also plans to construct a €90m flyover south of Atocha to connect the new tunnel to the Madrid - Barcelona high-speed line.