UPDATED NOVEMBER 16 13.50 CET: A TGV carrying out tests on the recently-completed second phase of the TGV Est high-speed line between Paris and Strasbourg derailed in the Bas-Rhin area of Alsace on November 14, killing 11 people and injuring 42, 12 of them seriously. 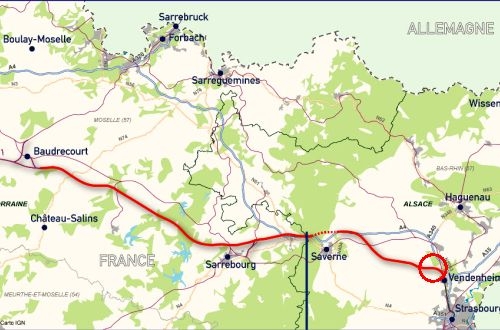 The derailment occurred at 15.10 CET near the village of Eckwersheim, 12km north of Strasbourg, close to where the high-speed line joins the conventional line from Sarrebourg to Strasbourg and where the new line crosses the Marne-Rhine Canal.

Separate investigations have been launched by Strasbourg's prosecutor, the Office of Land Transport Accident Inquiries (BEA-TT), and French National Railways (SNCF), which says there is no evidence at this stage to link the incident to the terrorist attacks in Paris on November 13. Strasbourg’s deputy prosecutor Mr Alexandre Chevrier said on November 15 that while criminal activity has not been ruled out it is not considered to be the likely cause.

At a press briefing in Strasbourg on November 16 Chevrier told reporters that there were 53 people on the train, including four "guests" aged between 10 and 15 years, who were believed to be the children of railway employees. All of the children survived and none sustained serious injuries. The remaining 49 people on board were traincrew and technical staff from SNCF and Systra. Chevrier said the driver, "an experienced professional", had sustained minor injuries and has told the police that the train had not exceeded the 176km/h maximum speed permitted during testing in the transition zone between the high-speed line and the junction with the conventional line, where the derailment occurred.

SNCF president Mr Guillaume Pepy said on November 15 that it is unclear how fast the train was travelling when it derailed because the onboard data recorders have not yet been recovered from the wreckage. “This accident is unprecendented and brings a major shock and deep sadness to the railway family,” he says. The recovery operation began on November 15, when the trailing power car was lifted from the canal.

The train involved in the accident was instrumented TGV Euroduplex Dasye set no. 744, which has been equipped with accelerometers to monitor vertical, longitudinal, and transverse acceleration. It had also been used to monitor the operation of signalling (ETCS Level 2 and TVM 430) and radio communications systems and pantograph-catenary contact.

Testing of the 106km high-speed line from Baudrecourt to Vendenheim line had reached the final stage of a four-phase process. Phase 1 covered preliminary testing of track components and was carried out during 2013 and 2014. Phase 2 was conducted between late 2013 and late 2014 and encompassed on-site inspections and functional testing within subsystems. During Phase 3, slow-speed test trains were used to evaluate the performance of subsystems and the interaction between track and train, a process which was carried out between late 2014 and August 2015.

Phase 4 – dynamic testing – began on September 28, with the TGV test train initially operating at up to 160km/h. Over the next seven weeks speeds were incrementally increased to 200, 240, 270, 300, 320, 340 and ultimately 352km/h, 10% above the 320km/h maximum operating speed – a requirement of the certification process.The maximum speed in transition zones on links to the conventional network is 160km/h and these sections have been tested at up to 176km/h. After each phase of testing the results are scrutinised by the test director before continuing to the next level.

Driver training was due to take place between January and March with the line opening to commercial traffic on April 3. Mr Jacques Rapoport, president of infrastructure manager SNCF Network confirmed on November 15 that the opening of the line will be delayed.