THE Chinese-Hungarian Railway Nonprofit Company (KMVN) issued a call for tenders on November 27 for contracts to rebuild most of the Hungarian section of the Budapest - Belgrade main line. 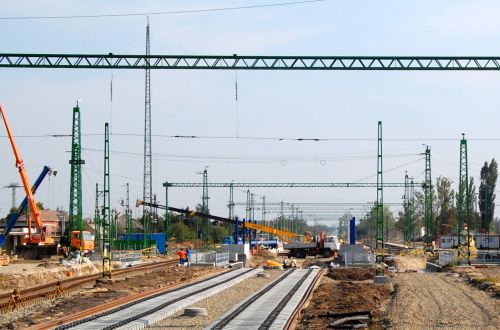 The launch of tendering coincided with the visit of Chinese prime minister Mr Li Ko-chiang to Budapest, who signed the contract to finance the rebuilding of Budapest - Kelebia line, as part of upgrading the Budapest – Belgrade rail corridor.

The official reasoning behind the upgrading of this route is that the port of Pireus in Greece is now owned by Chinese shipping company Cosco, and modernising hinterland links will pave the way for faster and smoother delivery of Chinese goods to Europe.

However, China is also keen to increase its presence in the European railway construction market and this will be a pilot project for Chinese companies within the EU.

KMVN will manage the project, employing a team of 15 Chinese and 13 Hungarian experts and engineers.

China’s Exim Bank will finance 85% of the Forints 750bn ($US 2.84bn) project, in the form of a bank loan, but the exact interest rate was not made public and even the feasibility study has been classified as a state secret for 10 years.

The line avoids major rural centres and will save only an hour in Hungary, while border formalities take much longer and the real bottleneck is at Subotica station south of the border in Serbia.

In the two-round bidding process, 50% of the score will be allocated for price, with the remainder for quality and professional criteria. The successful bidder will have 86 months from contract signing to prepare approval and building plans, carry out all construction works and successfully apply for permits to place the line in service.

The project involves rebuilding the railway as a double-track main line, with a maximum line speed of 160 km/h and a design speed of 200 km/h. The line will be equipped with GSM-R, ETCS Level 2 and centralised traffic control. Stations will be rebuilt to PRM standards and with loops capable of accommodating 750m-long freight trains, while the maximum axleload will be raised to 22.5 tonnes.

The Hungarian government has previously been criticised by the European Commission for granting construction rights to Chinese companies while neglecting European public tendering requirements. The current call for tenders is in line with European regulations, although it looks likely that Chinese companies will win much of the work.

To celebrate the lanch of tenders for the project, two loaded container trains departed from the BILK intermodal centre near Soroksár on November 27 bound for Changsha, China. The trains carried goods from central Europe such as foodstuffs, machinery, computer parts, as well as car gearboxes from Germany.

The trains are the result of a colaboration between Rail Cargo Hungaria, Rail Cargo Terminal-BILK, Ghibli, and China’s Central European Logistics and Retail Zone organisation.