TRIAL operations have begun on Zürich's new Durchmesserlinie (DML) cross-city link, which is due to open on June 15, with a total of 60 test trains passing through the new Löwenstrasse station beneath Zürich's existing main station over the weekend of April 12-13. 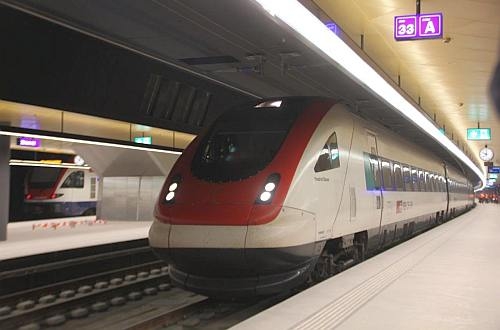 These included all types of train used on the Zürich S-Bahn network as well long-distance ICN and IC2000 trains, with passenger information systems being tested for both regular runs and with simulated disruptions. A full-scale evacuation procedure with 500 people was carried out the previous week.

The DML is the biggest urban construction project in Switzerland, linking Altstetten with Zürich Main Station before curving under the city centre to Oerlikon with the new Weinberg tunnel.

Testing was carried out at Löwenstrasse station, which has four tracks, and Oerlikon, which has been expanded by two tracks to eight, although only six will remain in use after construction work at this station has been finished. The section between the Main Station and Altstetten is still under construction and due for completion next year.

The new link will shorten transit times for connections between east and west Switzerland can be significantly and create new direct links. It will also help to ease congestion at Zürich's Main Station, which on a normal weekday is used by almost half a million passengers.