THE final phase of Vienna's new Main Station became operational on December 13, bringing a major-shake up of long-distance services into the Austrian capital. 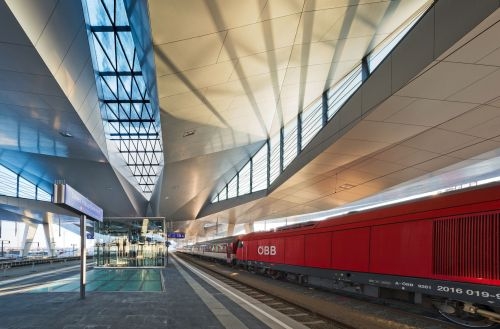 This has led to significant timetable changes for long distance services. The biggest change is that Vienna West is no longer served by Austrian Federal Railways (ÖBB) long-distance trains. All Railjet, Intercity, and ICE services from Linz now use the Lainz tunnel, calling only at Vienna Meidling and Vienna Main Station.

Hourly Railjets from the west and Intercity services from Salzburg continue beyond Vienna Main Station to Vienna Airport, although ICE services from Passau, which used to serve the airport, have been cut back to the Main Station.

Salzburg - Linz - Vienna services now have good connections with Prague - Vienna - Graz and Vienna - Villach trains at the Main Station. Budapest - Vienna trains and EuroCity services from Poland, which used to terminate at Vienna West have been cut back to the Main Station.

One of the challenges at the new station is limited train stabling space. Although the concept was to replace the city's terminus stations with a through station there are still many terminating trains, which need to be stabled elsewhere to optimise platform capacity. This means some regional trains from northern Lower Austria have been extended to Vienna Meidling to improve platform utilisation at the Main Station.

Nevertheless, the new station offers much better connections between long-distance trains from the south and from the west of Austria as well as from Hungary and Czech Republic. The journey time from Linz to Budapest is cut by 30 minutes by eliminating the turnaround at the Vienna West, which is now used only by Westbahn services to Salzburg and regional trains.