A groundbreaking ceremony was held on October 28 to mark the official start of construction on an SFr 1bn ($US 1bn) project to expand Berne Main Station, the second-largest station in Switzerland. 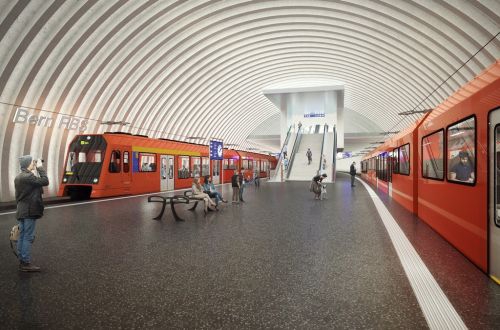 The project is divided into two parts. A new underground station with four tracks will be built underneath platforms 2-7 of the existing station for S-Bahn services operated by Bern - Solothurn Regional Transport (RBS). This will replace the current RBS underground station in the northeast corner of the main station, which is chronically overcrowded. Originally designed in 1965 with capacity for 16,000 passengers per day, these platforms are now used by up to 60,000 passengers per day.

Trains will run through a new 1km double-track tunnel, which will branch off from the existing RBS Schanzen tunnel.

In the second part of the project Swiss Federal Railways (SBB) will construct a second underground passageway with two new entrances in the western part of the station.

Preliminary works began in July and the project will be completed in 2025.

In a further phase, SBB plans to expand the station by 2035, with the addition of four new platforms under the “Grosse Schanze,” which will enable further expansion of regional and long-distance services. This will be implemented under the Strategic Development Programme for Railway Infrastructure (Step) and coordinated by the Swiss Federal Office of Transport (BAV), the cantons, and railway operators.