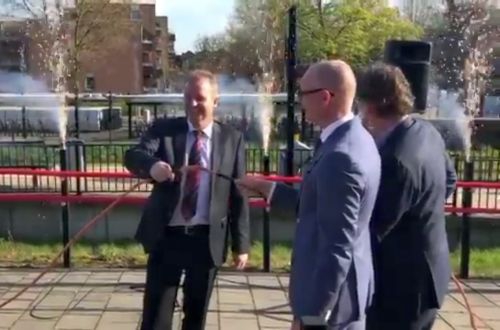 The line will be electrified at 1500V dc on the Dutch side and 15 kV 16.7 Hz ac on the German section, with trains switching between the two systems at the border. Power will be supplied via a single substation at Eygelshoven, which is being built by contractor Strukton.

The electrification project is financed by the Dutch Ministry of Infrastructure, the province of Limburg and the region of Aachen. The European Commission is also contributing to the project.

At present DB Regio operates an hourly fixed-pattern service between Heerlen (Netherlands) and Herzogenrath under the Euregiobahn brand.

The two-car Bombardier Talent DMUs currently used for these services will be superseded by new multi-system Stadler Flirt 3 EMUs, which will operate between Aachen Main Station and Maastricht via Heerlen.

Electric operation is due to start on December 9 and there are plans to extend these services from Maastricht to Liège in Belgium in the longer-term.