IRJ at Fourth Railway Forum, Berlin: ETIHAD Rail DB, the operator and infrastructure manager of the 254km Shah - Habshan - Ruwais railway, the first in the United Arab Emirates (UAE), says it has carried 5 million tonnes of granulated sulphur for Abu Dhabi National Oil Company since it began operating in 2015. 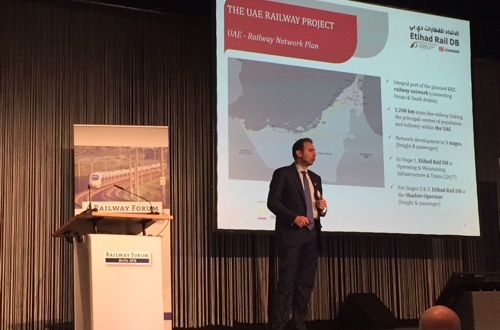 "We have exceeded the expectations of our client," Malak told IRJ. "When we decided to build the railway we had a tough task to convince them that it would be suitable because they have never used rail before, they have always used pipelines. But we managed to do this and they are very happy with the result."

Malak added that due to the volatile nature of sulphur, a byproduct of gas production, it is essential that the rail service is reliable. So far Etihad Rail DB has achieved on-time punctuality of 92%, and Malak says it is a 24/7, 365 days per year operation, with 200 people working on the line.

The UAE's environment inevitably presents challenges to operations, with the impact of drifting sand a major concern and various steps taken to mitigate the impact. These includes digging trenches, monitoring the movement of sand drifts, and using maintenance of way equipment to clear tracks when required, something Malak says is around a weekly occurrence. In addition, steps have been taken to minimise the impact on wildlife, particularly camels and gazelles, and to educate the public about safety around an active railway.

"The problem of running the railway is not operating the railway itself, it is everything that is nothing to do with operations," Malak says. "That's where the real challenge lies."

As for the future, Malak says there are obvious opportunities to carry additional sulphur as well as other products on the existing railway. He adds that Etihad Rail is also well placed to serve as the operator for the second and third phases of the UAE's planned railway network, and in other Gulf Cooperation Council (GCC) states.

"With the GCC investing $US 80bn in its railway projects between them, they will all require an operator," Malak says. "From our experience, Etihad Rail DB is well-positioned to work on these projects and operate the trains."

The complete interview with Shadi Malak will appear in an upcoming edition of IRJ.