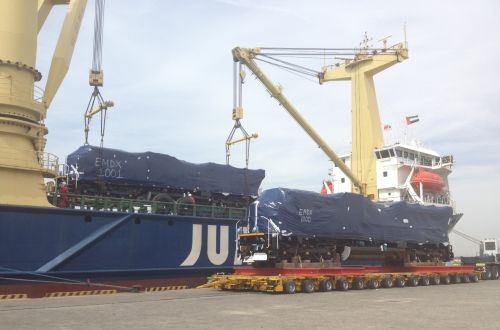 The SD70ACS locomotives are designed to withstand the harsh desert climate and keep carbon emissions to a minimum. The units will haul trains of 110 wagons carrying up to 11,000 tonnes of granulated sulphur on a 264km new line being built from Shah and Habshan to the port of Ruwais.

"The arrival of these locomotives is a remarkable step forward and another indicator that we are fast approaching the commencement of operations for Stage One," says Dr Nasser Al Mansoori, CEO of Etihad Rail. "The project is progressing on schedule and we are on track to see the first train run between Habshan and Ruwais by the end of this year."

The Etihad Rail network will eventually be extended to 1200km to form a national network carrying both freight and passengers.