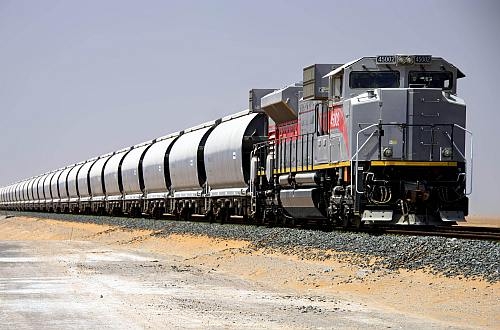 An Etihad Rail train on the completed first phase of the UAE rail network.

Falling oil revenues forced Etihad Rail to suspend the second phase of its national railway network. This involved the construction of 628km of new lines, encompassing the line from the Omani frontier near Al Ain to Ghweifat on the Saudi border, which is a key section of the Gulf Railway, together with links to the UAE's three principal ports.

As a result, al-Futaisi says Oman is considering whether to refocus its planned 2135km railway network on linking mines to its ports to facilitate the export of raw materials rather than connecting Omani ports with the UAE, Saudi Arabia, Qatar and Kuwait to transport imports.

Phase 1 of the Omani network is 207km long and was intended to link the port of Sohar to Buraimi on the UAE border. In October, Oman Rail received bids from eight groups for the operations and maintenance (O&M) contract for phase 1. Oman Rail has also prequalified more than a dozen groups for construction contracts for the next three phases of the network which cover more than 1200km from Hafeet on the border with the UAE to Salalah in the far south of the country. In December, Sultan Qaboos issued a Royal Decree declaring the second phase a public utility project paving the way for land acquisition for the 240km line from Hafeet to Fahoud.

It is not clear yet whether Oman Rail will delay these tenders while it considers its options.