ISRAEL’s minister of transport Mr Yisrael Katz took an inaugural trip on August 29 on the 60km Jezreel Valley line linking Haifa and Beit Shee’an ahead of the start of scheduled services on October 16. 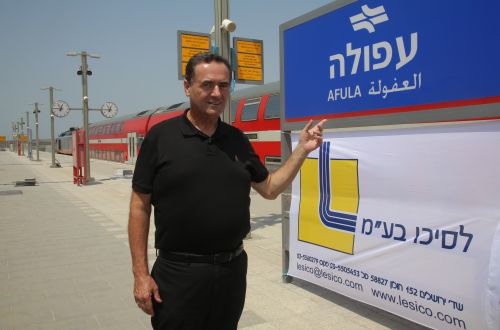 Israel's transport minister at Afula on the opening day.

Passengers will be able use the new service free-of-charge until November 4 after which they will be able to travel at half fare from all stations except Haifa for two years to stimulate ridership. The journey time from Haifa to Beit Shee’an will be 50 minutes.

The project has cost Shekels 4bn ($US 1bn) to implement and uses part of the alignment of the 1050mm-gauge Hedjaz Railway, which was abandoned in 1951.

The line has four intermediate stations and two more are planned at Haifa Bay and Nesher, while an extension to Sheikh Hussein bridge on the Jordanian border is planned. A freight terminal is being constructed at Kibbutz Sde Nahum west of Beit Shee'an. Construction of a 30km double-track line from Afula, on the Valley line, to Tiberias on the Sea of the Galilee is proposed.