A ceremony was held at Afula station in Israel on November 8 to mark the start of commercial services on the 60km Valley Line linking Haifa Lev Hamifratz with Beit Shee'an following three months of trial operation. 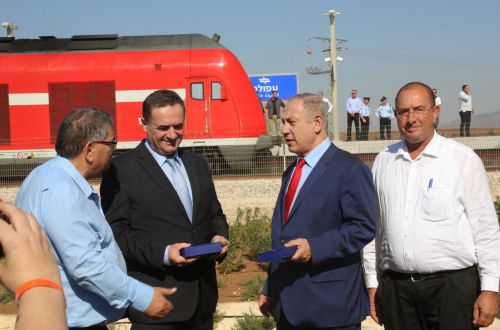 From left to right: the mayor of Afula, Katz, Netanyahu, and Lavie.
Photo Credit: Avner Ovadya

Katz says trial operation demonstrated the value of the new line as it has already carried more than 100,000 passengers. However, passengers can travel free-of-charge until February 6 2017, after which tickets will be sold at half price for the following two years.

Freight services started on the Valley Line on November 6 between the ports of Ashdod and Haifa and Beit-She'an where a temporary freight terminal has been built until a permanent terminal is ready.

Katz has instructed his staff to promote the construction of a rail link to Jordan, and he says that a revival of the line between Afula and Jenin in the Palestinian Authority is also on the agenda.