IRJ at InnoTrans 2016: SIEMENS says it has delivered eight of the 19 Avenio QEC low-floor LRVs for Qatar’s Education City light rail line, while the remaining 11 vehicles are at the company’s Wildenrath test centre in northwest Germany. 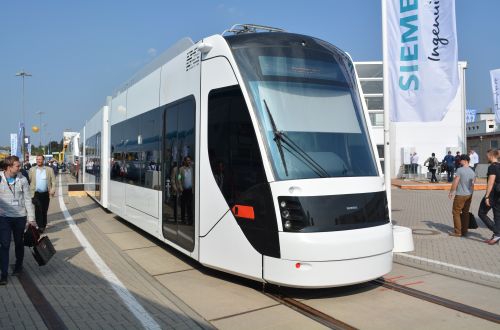 One of the 27.7m-long bidirectional vehicles is on display in the outdoor area at InnoTrans. The three-section vehicle accommodates 157 passengers (at 4 passengers m2), 51 of them seated including three on tip-up seats.

Due to open in the middle of next year, the 11.5km line will link the Doha metro with Education City and will be catenary-free for its entire length. The Avenio QEC is equipped with Siemens ultracapacitor-based Sitras HES onboard energy storage system with back-up batteries.

The roof-mounted ultracapacitors will be recharged at each stop with a 1000A current and a 20-second cycle for a full charge. Siemens says one of the vehicles has operated for 6km in catenary-free mode on the line in Qatar and for 30km while on test at Wildenrath.

Siemens was awarded a €100m turnkey contract by the Qatar Foundation in July 2012 to equip the line. In addition to rolling stock, the contract includes signalling and communications systems, electrification, and depot equipment.