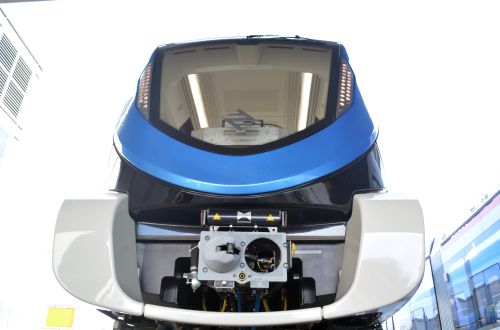 As E&M partner in the Bechtel-led Bacs consortium, Siemens is supplying 45 four-car trains for Line 1 and 29 two-car trains for Line 2 (Red Line) under a turnkey contract which also includes automatic train control systems and electrification for the two lines.

Each 75.7m-long four-car train for Line 1 accommodates up to 522 passengers (at 4 passengers/m2), 123 of them seated, in first, family, and second class accommodation. Interior and exterior design was developed by Siemens in collaboration with French design bureau Avant Premiere. Notably, there are no visible screw heads or fixing points inside the train – a requirement of ARA’s specification.

Each aluminium-bodied car has six sets of sliding plug doors and two compact HVAC units, which are designed to operate in ambient temperatures as high as 55oC. The trains also feature LED interior lighting and full-width gangways.

Three vehicles in each four-car train are motorised and each motor bogie is driven by two self-ventilated 1TB 20 series traction motors, which are controlled without speed sensors.
Siemens says it has tested the performance of all electrical equipment using sand and dust from the Riyadh region to simulate the condition the 750V dc third-rail trains will encounter in Saud Arabia.

The trains are due to be delivered to Riyadh in 2017-18. Two trains are currently undergoing tests at Siemens test facility at Wildenrath in northwest Germany.