SAUDI transport minister Mr Jabara Al-Seraisry confirmed on November 24 that trial operation will begin "early next year" on the first completed section of the 450km Haramain high-speed line from Medina to Jeddah and Mecca. 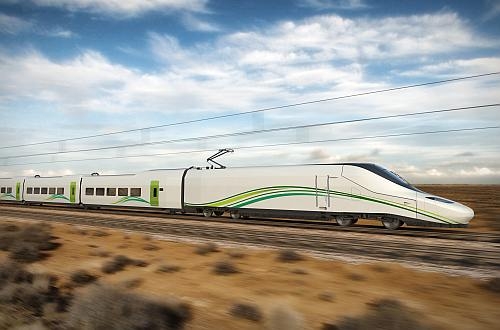 Testing will initially be carried out on the northern section of the route between King Abdullah Economic City (KAEC) in Rabigh and Medina. Al-Seraisry says the first 13-car Talgo 350 train for the route is expected to arrive in Saudi Arabia by the end of the year. The first drivers are being trained in Spain by Renfe and SRO says the best drivers will become instructors for the next batch of trainees.

According to the minister construction is 90% complete on the main stations and feasibility studies are underway into an additional station, which will be located near the Meeqat mosque in Medina.

Talgo is supplying 36 of the 320km/h trains to Saudi Railways Organisation (SRO), one of which will be a royal train. Each train will seat up to 417 passengers and trains will be capable of operating in multiple.

According to the Saudi Press Agency, SRO president H E Mohammad Khalid Al-Suwaiket told a meeting of the Mecca Chamber of Commerce and Industry last week that the service pattern when the line is fully-completed will be seven Mecca – Jeddah, two Mecca – Medina, and and four Mecca – KAEC services. Public services are expected to begin operating between Medina and KAEC by the end of 2015.

The line will have daily capacity of 160,000 passengers and is expected to carry more than 50 million passengers per year.