Tunnelling completed on A1 rail link to Jerusalem

THE final breakthrough of the second bore of the 11.6km tunnel on the Tel Aviv - Jerusalem A1 fast rail link took place on October 6, marking completion of tunnelling on the project. 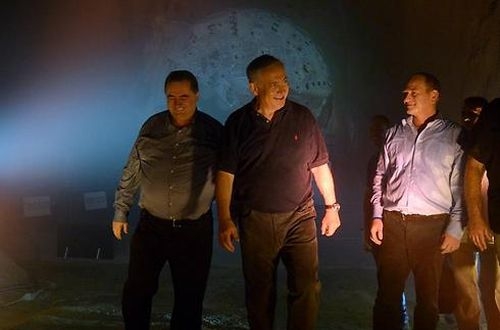 Israel Katz (left), Benjamin Netanyahu, and Boaz Zafrir at the tunnel hole through.

Construction on the 38km double-track line from Tel Aviv Ben Gurion Airport to Jerusalem started in 2005. When it opens in 2017 it will cut the journey time between Tel Aviv Savidor Centre and Jerusalem from 1h 25min today using the existing line to just 28 minutes. Israel Railways plans to operate up to three trains per hour during peak hours.