ARRIYADH Development Authority (ADA) announced the winning bidders on July 28 for three design and build contracts worth almost $US 22.5bn for the construction of a 176.7km six-line automated metro network in the Saudi capital Riyadh. 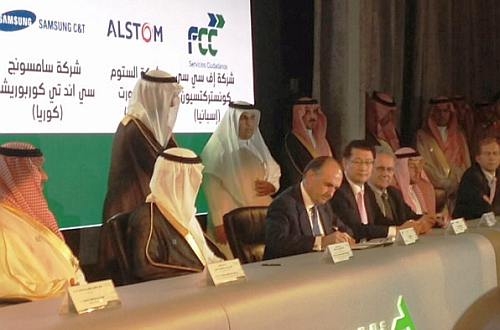 The Fast consortium, which is led by Spanish construction group FCC, will build three lines totalling 73km in a deal worth $US 7.82bn. The contract includes:

- The 13km Yellow Line, which will follow King Abdul Aziz Road, and

The contract includes the construction of 29.8km of viaduct and 26.6km of tunnels. Fast will use three 10m-diameter TBMs to construct the underground sections.

FCC's partners in Fast include Alstom; Samsung C&T; Strukton, Netherlands; Freyssinet, Saudi Arabia; Typsa, Spain; and Setec, France. Alstom's share of the contract is worth around $US 1.6bn and includes a fleet of 69 Metropolis trains, together with Communications Based Train Control (CBTC), Hesop energy recovery system, and its Appitrack tracklaying system. The 36m-long two-car trains will be 2.71m wide with first class, family class, and single accommodation.

The Arriyadh New Mobility Group (ANM) will construct the 40.7km Red Line from Madina Al Munawara to Amir Saad bin Abdul Rahman Al Awad Road in a contract worth $US 5.21bn. ANM is led by Ansaldo STS and includes civil works contractors Salini-Impreglio, Larsen & Toubro, and Nemsa, together with Bombardier, which will supply a fleet of 47 two-car trains.

Ansaldo STS' share is worth $US 680m and covers automatic train control (ATC), CBTC, power supplies including third-rail electrification, the operational control centre, telecommunications, and fitting out depots. The contract includes an option for 10 years' maintenance.

Finally, the Bechtel-led BACS consortium will build the 39km Blue Line from Olaya Street to Batha Street and Al Hayer Road, and the 25km Green Line along King Abdullah Road. The consortium includes Aecom and Siemens, and the contract has a total value of $US 9.45bn.

According to FCC, the construction of the network will require 600,000 tonnes of steel, 4.3 million cubic metres of concrete, and will employ more than 30,000 people, more than half of them in the Fast consortium. Construction is expected to begin in the first quarter of next year and commercial services will start on the initial operating sections in 2018 with the entire 176km network due to be commissioned by 2019.

The ADA says it is creating a world-class public transport project in response to the rapid growth of Riyadh, which will need to accommodate a 40% increase in its population from 5.7 million to 8.3 million and a 60% rise in travel demand by 2030. At present only around 2% of trips in the city are by public transport.

Tendering for the network began in July 2012 and no less than 37 consortia submitted expressions of interest.