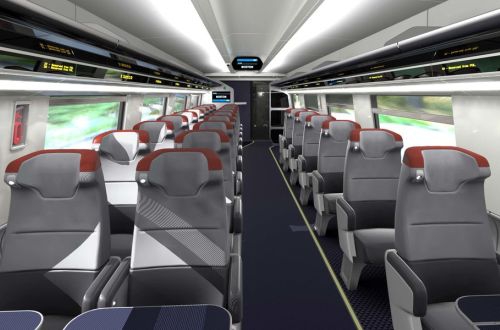 Amtrak says the new Acela trains will feature “spacious and smooth leather seats” with integrated in-seat lighting, power sockets, and USB ports. Each seat will be equipped with a dual tray table, providing the passenger with a choice of large or small tables.

The trains will also be equipped with high-speed passenger Wi-Fi, an advanced seat reservation system, and accessible toilets, which will be compliant with the provisions of the American Disabilities Act (ADA).

Each train will seat 386 passengers, an increase of nearly 30% compared with the current Acela Express trains.

Production of a prototype Avelia Liberty set is underway at Alstom’s facility in Hornell, New York, and due for delivery to Amtrak for the start of trials next year. The entire fleet is due to enter service by the end of 2022, enabling the withdrawal of the current Acela fleet.