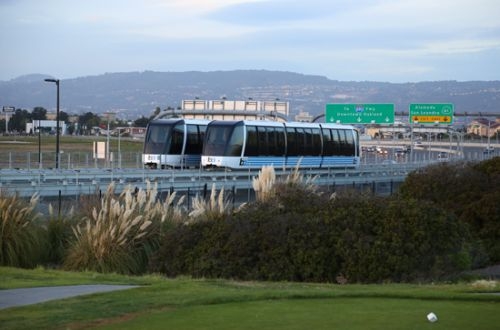 An estimated 2745 passengers per day are expected to use the line in its first year of operation, about the same number riding the AirBart shuttle bus, and over 700 people enjoyed a free ride on November 21 during a public celebration of the new service.

The new line utilises four three-car trains which operate at up to 48km/h and were supplied by Doppelmayr Cable Car, which is also responsible for operation and maintenance. A joint venture of Flatiron and Parsons was the lead contractor for the project, which began in 2010. The journey takes eight minutes and services operate between 05:00 and 00.00, in line with the overall Bart system. The fare is $US 6.

"The ride and the experience alone are memorable," says Bart General Manager Ms Grace Crunican. "Riders get a 360 degree view from the windows surrounding the entire car as you travel over the traffic below. It's a cable propelled system with light-weight and quiet trains, so it's like gliding through the air."