Brightline to restart its Florida trains in November

Covid-19 forced suspension of all services between Miami, Fort Lauderdale and West Palm Beach in March 2020. 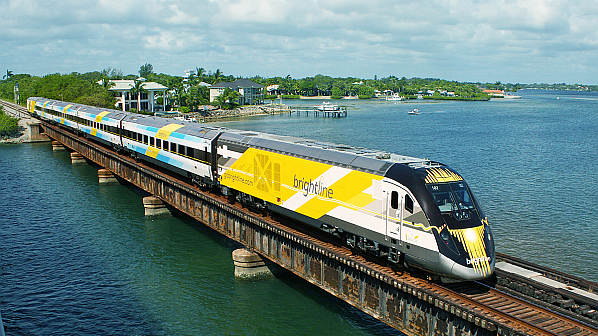 BRIGHTLINE announced on August 10 that it intends to resume running trains to South Florida in the first half of November, although no exact date has been confirmed.

During a virtual media update on August 10, the operator’s president, Mr Patrick Goddard, confirmed that the trains restart between Miami, Fort Lauderdale and West Palm Beach. The specific date of the resumption of services will be announced in the coming weeks.

Before that, the operator and Florida East Coast Railway are working in coordination with the Federal Railroad Administration (FRA) to commission Positive Train Control (PTC) and achieve system certification. Once that is granted, Brightline will resume operation for the first time since they were suspended in March 2020 due to the pandemic.

“Over the last few months, we’ve made upgrades to our guest experience and made significant strides in construction,” Goddard says. “Our goal remains the same, to take cars off the road while offering the most convenient way to travel in South Florida.”

Up to 200 new jobs are being created in the build-up to the relaunch, and Brightline is planning to host career fairs throughout South Florida.

A new Mobility as a Service (MaaS) platform has been launched to assist with passengers’ first and last mile connections. This has been developed in partnership with Iomob. It includes a selection of private luxury cars, shared shuttle services, golf carts and micro-mobility options.

Measures introduced include full vaccination of all staff prior to the reintroduction of service. The operator plans to introduce an almost touchless transport system with safety measures including increased cleaning, pre-packaged foods, touchless bathrooms, cashless payment and electronic tickets.

As per the existing federal mandate, all staff and passengers must wear facemasks in stations and on-board all trains. Plexiglass dividers are being fitted between each four-person table in every coach.

Brightline says 25% of the air in its coaches is from fresh air intake ducts and is then filtered before being mixed with recirculated air. The operator has confirmed that it will use a Needlepoint Bipolar Ionization (NPBI) system developed by Siemens, which built its trains. This ozone-free NPBI artificially creates millions of positive and negative ions and releases them into the forced-air circulation system. The ions neutralise pathogens, viruses and bacteria.

Goddard also used the media event to confirm that work continues on new stations in Aventura and Boca Raton. At the former, construction work is underway while it’s expected that ground will be broken at Boca Raton in the coming months.

He also confirmed that construction to Orlando has passed the halfway stage and is on target to be completed by the end of next year. Goddard says discussions continue with local stakeholders regarding planned expansions to Disney and Tampa.