Memorandum of Understanding signed for a 77km section of Brightline West line to link stations in California. 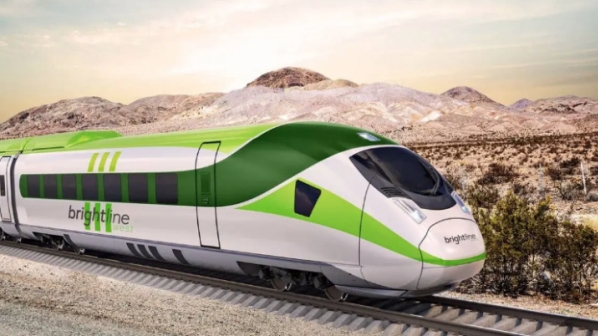 BRIGHTLINE West has signed a Memorandum of Understanding (MoU) with the California State Transportation Agency (CalSta), California Department of Transportation (Caltrans) and California High-Speed Rail Authority which sets the framework for using 77km of right-of-way within Interstate highway 15 to link its proposed Victor Valley station and a new station at Rancho Cucamonga between San Bernardino and Los Angeles.

The MoU follows a 15-day Notice of Intent process which took place earlier this year and allowed for public comment on the project before signature.

The stations are part of Brightline’s planned $US 8bn Las Vegas - Los Angeles line. Rancho Cucamonga station is being designed as a multi-modal station. It will include existing Metrolink commuter rail platforms and a planned underground tunnel to Ontario International Airport to the south. Metrolink already operates trains from its current Rancho Cucamonga station, which is adjacent to the planned new facility, to Los Angeles and San Bernadino.

“This Memorandum of Understanding marks a critical milestone in our goal to connect the Los Angeles metropolitan area with the iconic entertainment destination of Las Vegas,” says Brightline Holdings CEO, Mr Mike Reininger. “This system will provide an optimal travel solution between Southern California and Las Vegas, and opens up the reality of emission-free, hospitality-focused high-speed rail service to millions of people travelling between these destinations every year.”

“In entering this MoU with Brightline West, CalSta, Caltrans and the California High-Speed Rail Authority are setting the course for high-speed trains to connect southern California and Las Vegas,” said Mr David Kim, CalSta secretary. “This is an important step in bringing major benefits to the state, including reducing congestion and greenhouse gas emissions on the Interstate 15 corridor and increased connectivity with rail and transit throughout southern California as well as future connections with the state’s high-speed rail system.”

An interview with Brightline CEO Mr Mike Reininger appears in the November edition of IRJ, and can be read here.

For detailed data on rail projects around the United States, subscribe to IRJ Pro.