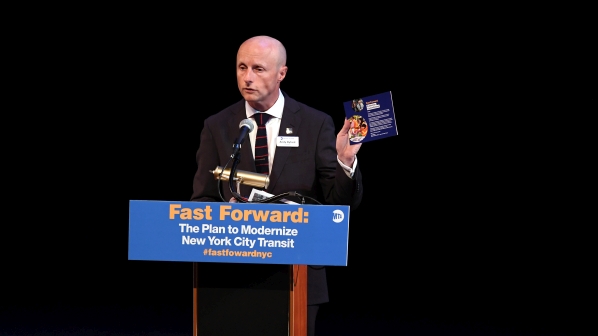 Andy Byford said he was proud of what was achieved over the two years he spent at NYCT.
Photo Credit: Marc A Hermann/MTA New York City Transit

“I’m very proud of what we have achieved as a team over the past two years and I believe New York City Transit is well-placed to continue its forward progress now that the MTA has a record-breaking $US 51.5bn Capital Program in place,” Byford says. “I’m very grateful to governor Cuomo, chairman Foye and members of the board for giving me the opportunity to serve New York and to head up North America’s largest transit system.”

When Byford joined MTA after a five-year term as CEO of the Toronto Transit Commission (TTC), North America’s third-largest transit system, he faced a momentous task of turning around the under-funded and under-pressure network to improve services for its 5.5 million daily riders.

Byford did have success, improving on-time performance for trains from 58% when he took over in 2018 to more than 80% through operational changes that focused on the basics, like upgrading signals.

IRJ’s US sister publication Railway Age reports that even though the MTA did not give a reason for the resignation, speculation is that Byford was fed up with the political meddling - most of it perpetrated by Cuomo. He was also unwilling to work within the constraints of the MTA’s Cuomo-induced restructuring, which would have diminished his role to running day-to-day NYCT operations.

Byford began his transit career at London Underground where, over 14 years, he rose to the position of general manager of the Central, Bakerloo and Victoria lines, overseeing increases in customer satisfaction and operational performance. He then became chief operating officer of NSW RailCorp, operator of Australia’s largest transit system, in Sydney. At TTC, among other accomplishments, he introduced CBTC and completed the $US 2.5bn Toronto York Spadina Subway extension.

“Subway and bus riders are grateful to Andy Byford for his historic service at New York City Transit,” said Riders Alliance executive director, Mr John Raskin. “In two years, Andy made subways faster and more reliable, he tackled longstanding challenges to improve bus services, and he crafted the first plan in a generation that would truly modernise the transit system.

“No matter who runs the transit system day-to-day, ultimately governor Cuomo is in charge of the MTA, and riders will be holding the governor accountable for the quality of our transit service. With whatever management team he puts in place, the governor is on the hook for making subways faster and more reliable, rescuing buses from years of decline, and delivering on a $US 51bn capital programme to fix public transit for the long term.”