THE board of Californian commuter rail operator Caltrain has approved contracts with a total value of $US 1.25bn for the electrification of the San Francisco - San Jose line, together with a new fleet of electric trains for the 82km route. 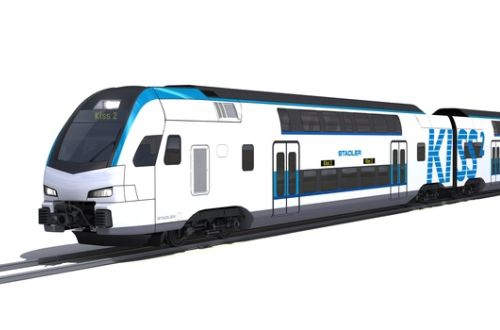 Balfour Beatty Infrastructure has been selected for a design-build contract to electrify the line, while Stadler USA will supply a fleet of double-deck EMUs to replace the locomotive-hauled trains currently in operation. The request for proposals specifies eight-car trains, although some stations will only initially accommodate six-car sets. the order will be for 96 vehicles with an option for 20 additional cars. The 25kV 60Hz ac trains will initially operate at up to 127km/h, but will need to be capable of 177km/h running for blended operation with California High-Speed services, which will also use the San Francisco - San Jose line. Blended operation is expected to begin in 2026-29 with six Caltrain and four high-speed services per hour anticipated at peak times.

The two contracts have been approved with a limited notice to proceed and Caltrain says a full notice to proceed will only be issued when it secures a funding agreement with the Federal Transit Administration (FTA), which is due to be finalised later this year.

The total budget for the Peninsula Corridor Electrification Project (PCEP) is $US 1.9bn, which includes $US 697m for electrification, $US 551m for new rolling stock, $US 416m for separate contracts and support costs, and a $US 316m contingency fund.

The largest share of funding ($US 978m) is expected to come from federal sources, with the state of California providing $US 751m. The remaining $US 261m will come from local and regional sources.

Local and state funding has been secured through a series of agreements between Caltrain and the Metropolitan Transportation Commission; Caltrain's member agencies in San Francisco, Santa Clara and San Mateo Counties; and the California High Speed Rail Authority.

In 2015 Caltrain applied for a $US 647m grant from the FTA Core Capacity Program. In February, the Obama administration allocated $US 73m in prior year funding to the project and requested the inclusion of a further $US 125m in the 2017 federal budget.