A GROUNDBREAKING ceremony was held in Little Tokyo on September 30 to mark the start of construction on the 3km Regional Connector light rail link in Los Angeles city centre. 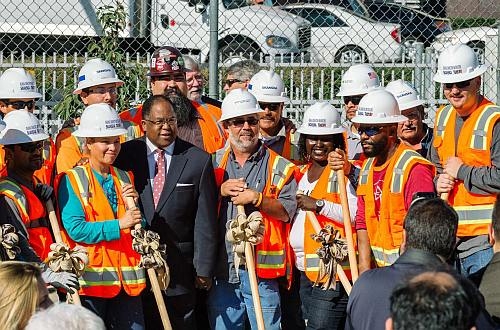 The underground line will link the Gold Line in Little Tokyo with the Expo and Blue lines, which currently terminate at Flower and 7th Street. The connector will have three new stations: 1st Street and Central Avenue, 2nd Street and Broadway, and 2nd and Hope streets.

The $US 1.42bn project, which is due to be completed in 2020, will reconfigure the three existing LRT lines into two lines, one running north-south and the other east-west, and for many passengers it will eliminate the need to make more than one change between light rail and the metro Red and Purple lines.

Construction is already underway on three other light rail projects in Los Angeles: the 13.7km Crenshaw/LAX line; the 10.6km second phase of the Expo line to Santa Monica town centre; and the 18.5km Gold Line Foothill Extension. Preliminary works have also commenced on the initial 6.3km section of the metro Purple Line extension.