Hurricane Sandy leaves a trail of damage in its wake

FREIGHT and passenger operators across the northeast of the United States are endeavouring to assess damage left by Hurricane Sandy and restore train services where possible. 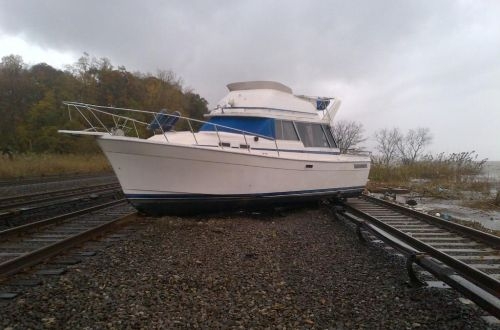 The New York area seems to have suffered the worst damage.

Norfolk Southern is advising customers to continue to expect delays in freight, while CSX implemented an embargo on traffic originating on other railways and travelling to an area stretching from Boston to Philadelphia. The railway says the embargo is necessary to avoid congestion on the network and support a fluid recovery when the storm passes. CSX train operations remain suspended on its network from Richmond, Virginia, north to Albany.

New York's rail network seems to have taken a particularly brutal hit with MTA chairman Mr Joseph Lhota saying that the system "has never faced a disaster as devastating as what we experienced last night.

"As of last night, seven subway tunnels under the East River flooded," Lhota continued. "Metro-North Railroad lost power from 59th Street to Croton-Harmon on the Hudson Line and to New Haven on the New Haven Line. The Long Island Rail Road evacuated its West Side Yards and suffered flooding in one East River tunnel.

"We are assessing the extent of the damage and beginning the process of recovery. In 108 years, our employees have never faced a challenge like the one that confronts us now. All of us at the MTA are committed to restoring the system as quickly as we can to help bring New York back to normal."