THE premier of Ontario Ms Kathleen Wynne announced on May 19 that the province will move forward with plans to build Canada’s first high-speed line after a report by Mr David Collenette, Ontario’s special advisor on high-speed rail, concluded the project has a positive business case. 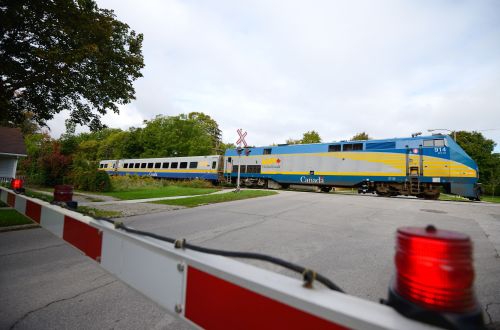 Wynne confirmed that the province will now begin preliminary design work on the line from Toronto to Windsor, which will serve intermediate stations at Pearson, Guelph, Kitchener-Waterloo, London and Chatham. Ontario has also allocated $C 15m ($US 11m) to carry out a comprehensive environmental assessment.

Collenette’s report outlines two possible options for the project. Scenario A is a 300km/h electrified line operating primarily on dedicated rights of way. Scenario B in an electrified line using a combination of existing infrastructure and dedicated new alignments to achieve speeds of up to 250km/h.

The assessment found that Scenario A offered a Benefit-Cost Ratio (BCR) of 0.36 for Phase 1 (Toronto - London) and 0.17 for Phase 2 (London-Windsor), which rendered this option unviable. The low BCR resulted from the need for extensive tunnelling, which resulted in a base cost of $C 19bn excluding contingencies for the full corridor.

Scenario B has a BCR of 1.02 for Phase 1 and 0.24 for Phase 2, reflecting higher forecast demand on the Toronto - London section. The base cost for this option is $C 7.5bn excluding contingencies.

From Toronto’s Union Station, high-speed trains would travel along Go Transit’s Kitchener corridor, calling at Malton for Pearson Airport, and at Guelph station. HSR trains would share the line with the Union Pearson (UP) Express and Go RER services on the corridor to Kitchener. This mixed operating model is likely to require a number of infrastructure improvements on this section and costs could be shared with the RER project.

From Kitchener-Waterloo’s planned multimodal station high-speed services would continue their journey west to London on a new dedicated double-track line, with sustained speeds of 250km/h anticipated on much of this segment.

The second phase from London to Windsor would run on a new electrified single-track line, which would run parallel to the existing Canadian National (CN) and Canadian Pacific (CP) lines.

The report says design and construction “should ideally start by 2022,” with commercial operations beginning in 2025. Implementation of the project will be overseen by a new governing entity, High Speed Rail Corporation (HSRCO).

Ridership is forecast to reach 10 million passengers per year by 2041, with rail capturing an 11% modal share on the corridor, eliminating five million car journeys a year.

The corridor is home to around 7 million people and 60% of Ontario’s economic activity. “We’re growing and we’re outgrowing our current transport network,” says Wynne. “We have to provide faster, better, more sustainable transport options. The best time to build high-speed rail was 40 years ago. The second-best time is today. So that’s what we’re going to do.

“There have been a lot of excuses in the high-speed rail debate in Canada - the country is too large, the population is too small, it won’t be worth it. Those were commonly-held views in the 70s, 80s, 90s, and early 2000s. It may be that they made sense then. But it’s 2017 and that has changed. We know there’s enough demand that we need to get moving on this. The next generation don’t believe those excuses. They have been to other parts of the world, they know there are better ways to get around.”