TRANSPORT Canada has uncovered serious violations under Canada's Railway Safety Act and the Fisheries Act in connection with the horrific 2013 oil train derailment in Lac-Mégantic. 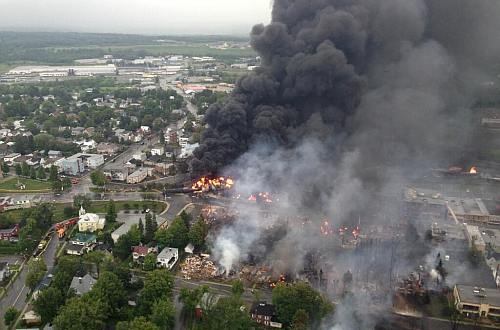 Charges are now being made for violating the act in connection with the accident. Not all affected individuals have been served as this process may take several days. The accused are: Montréal Maine & Atlantic Canada Co.; Montreal Maine & Atlantic Canada Railway; Mr Robert C. Grindrod, president and CEO of The Montreal, Maine and Atlantic Railway; Lynne Ellen Labonté; Kenneth Strout; Thomas Harding; Jean Demaître; and Mike Horan.

All persons accused are being charged on two counts, and under the Railway Safety Act companies could be fined up to $C 1m ($US 0.8m), and individuals could face a fine of up to $C 50,000 or up to six months in jail, or both. This applies per charge.

"Transport Canada takes the safety of the Canadian railway system very seriously by establishing strict rules, regulations and standards, such as the new tougher, more robust tank cars used for transporting oil," Transport Canada said in a statement. "Following the accident, the department introduced even stricter requirements for railways to physically secure trains and reduce their speed when carrying dangerous goods in a highly urbanised area."

Environment Canada's investigation under the Fisheries Act relates to the prohibition of depositing or permitting the deposit of a deleterious substance into fish-bearing waters with the release of crude oil into the immediate environment of Lac Mégantic and the Chaudière River as a result of the accident.

Those charged must appear before the court in Lac-Mégantic on November 12, where it will then be up to the courts to determine fault.

"The actions taken by the government of Canada in response to this tragedy is a testament to its efforts to continually improve both environmental security and rail safety for all Canadians," the department said. "From the beginning, the Government of Canada stood by Lac-Mégantic and it remains committed to doing everything possible to help rebuild and restore this vibrant community."

In the wake of the accident, the Canadian government contributed more than $C 155m to support the community of Lac-Mégantic.