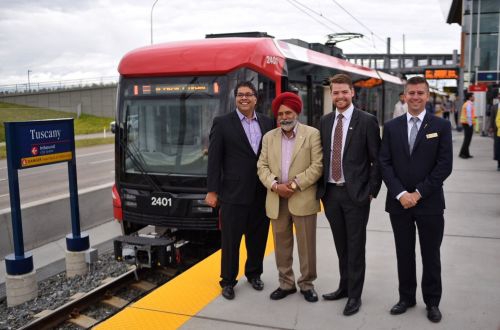 Calgary Transit signed a $C 201.6m ($US 154m) contract with Siemens in September 2013 for 63 S200s, which will support the introduction of four-car operation on the CTrain network and enable the withdrawal of the oldest U2 vehicles, which date from the opening of the system in 1981.

Assembly is being carried out at Siemens' plant in Sacramento, California, and deliveries are due to be completed next year.

The vehicles are known as Mask cars after the exterior design, which was inspired by an ice hockey mask and selected by the citizens of Calgary from three options in a public vote.

The order is being funded by the government of Alberta, with $C 133m coming from the Green Transit Incentives Program (GreenTrip) and $C 67m from the Municipal Sustainability Initiative.

The Canadian government has provided $C 51.3m through the Building Canada Fund for various improvements to the CTrain network, including $C 20m for platform extensions to enable four-car operation.