CALIFORNIA’s Orange County Transportation Authority (Octa) has selected Siemens as preferred bidder for a contract to supply eight S70 low-floor LRVs for the OC Streetcar project, construction of which is expected to begin later this year. 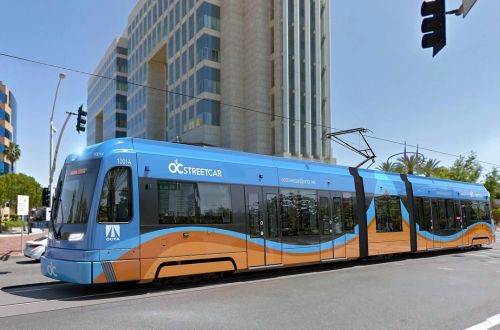 Siemens submitted a bid of $US 51.5m for the contract and is offering a vehicle based on its S70 design.

The contract includes systems support and driver training, as well as an option for up to 10 additional vehicles. Assembly will take place at Siemens’ Sacramento plant.

Six vehicles will be required to operate the line’s 10-15-minute-interval service, with two maintenance spares.

Each 26.8m-long three-section vehicle will accommodate 180 passengers, 70 of them seated.

The route will serve Santa Ana’s central business district, which includes county and local government offices and courthouses in the Civic Center. It will also connect with Octa bus routes and Metrolink commuter rail services.

The line is due to open in 2020 and is forecast to carry 7300 passengers per day in the first year of operation.

The $US 299m project is being funded through Measure M, Orange County’s half-cent sales tax for transport improvements, and a mixture of state and federal funding.

Octa says it has been working closely throughout planning and design with the Federal Transit Administration (FTA), which is considering a Full Funding Grant Agreement (FFGA) to cover around half of the project’s cost. Of that, $US 50m was included in the president’s 2017 budget.

Because Octa met all federal guidelines during project development, the FTA has given the authority written pre-award authority to move forward with the purchase of LRVs.