SOUND Transit, which is responsible for building and operating commuter rail, light rail and bus services in the Everett, Seattle and Tacoma area of Washington State, plans to invest $US 1.6bn this year, of which $US 1.2bn is for light rail as part of a plan to create a 187km light rail system. 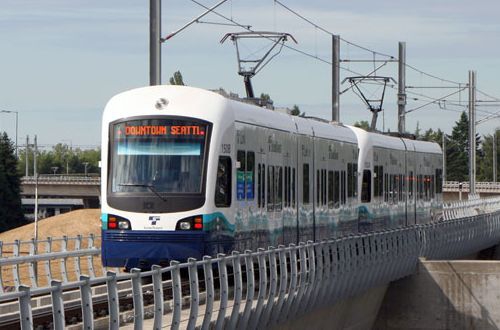 “In 2017 Sound Transit will make significant progress toward delivering infrastructure expansions that will boost our region's economy while giving commuters a reliable and desirable alternative to the worsening congestion on our roadways,” says Sound Transit CEO Mr Peter Rogoff. “Work is already underway on some of the new projects.” Regional voters approved the plans on November 8.

The 2017 budget will step up construction of the East Link light rail project which will extend the existing 2.6km line in Tacoma by 3.86km. The double-track extension will have six stations, and work was scheduled to start in January on a short tunnel through Downtown Bellevue. Sound Transit has invited bids by April 3 for a tender to supply five LRVs to increase the Tacoma fleet to eight vehicles. The extension is scheduled to open in 2021.

Work on light rail design will continue as Sound Transit works toward the 2023 opening of the 13.7km light rail extension from Northgate north to Lynnwood and the 2024 openings to Federal Way (12.2km) and Downtown Redmond.

With Sound Transit ridership now exceeding 150,000 each weekday, the budget includes $US 396m for transit operations. In September Sound Transit will add two new round trips on the Sounder south line.

Link light rail
• $US 393.4m towards the light rail extension from downtown Seattle to downtown Bellevue and the Overlake Transit Center in Redmond
• $US 258.9m million to continue construction of the $US 1.9bn 6.9km Northgate Link extension, including tunnels, station boxes, and station final design
• $US 116.2m to continue the Lynnwood Link extension final design
• $US 99.8m for a design-build contract for the East Operations and Maintenance base
• $US 59.5m for light rail vehicle procurement
• $US 14.2m to complete preliminary engineering to extend light rail 6km from Overlake Transit Center to downtown Redmond
• $U 6.1m to complete the environmental process and preliminary engineering for the Federal Way Link extension and transition to final design, and
• $US 9.9m for final design of the Tacoma Link extension.