GREATER Vancouver transport authority Translink has selected a consortium led by SNC-Lavalin as preferred bidder for the contract to finance, design, and build the $C 1.4bn ($US 1.43bn) Skytrain Evergreen Line. 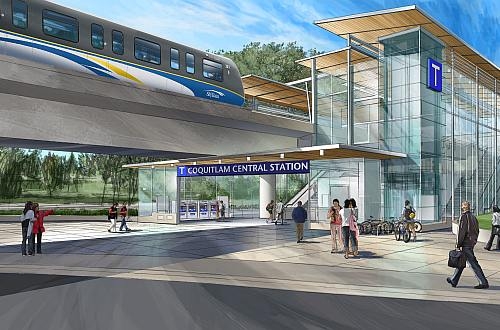 The two other bidders competing for the contract were EL Partners, a consortium of Bombardier and Genivar, and Kiewit/Flatiron Evergreen Line, which comprised Kiewit, Hochtief, and Stantec Consulting, Canada.

The 11km Evergreen Line will diverge from the existing Millennium Line at Lougheed Town Centre, running on viaduct through Burquitlam before entering a 2km tunnel. It will emerge east of Barnet highway, running at grade alongside the Canadian Pacific (CP) line towards Port Moody station, where there will be an interchange with bus and commuter rail services. Continuing east, a bridge will carry the line across the CP tracks, which it will follow through Ioco towards Coquitlam, where it will turn north onto a short elevated section to reach the terminus at Douglas College.

The line will provide a journey time of 40 minutes between Coquitlam and central Vancouver, compared with around 85 minutes by car. Trains will operate with a minimum headway of three minutes, and services will run 20 hours a day. The line is expected to carry around 70,000 passengers per day by 2021.