THE mayor of Chicago Mr Rahm Emanuel and Illinois governor Mr Pat Quinn announced on December 5 that Chicago Transit Authority (CTA) will invest $US 492 in the modernisation of the Blue Line O'Hare Branch, which links the city's main international airport with the city centre. 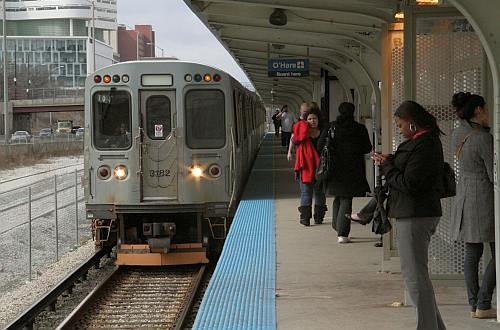 The project includes track and station improvements on the 20.1km section of the line between Grand and Cumberland stations, eliminating a number of speed restrictions, as well as upgrading of signalling systems between Jefferson Park and O'Hare.

Traction power supplies will also be improved and wireless telecommunications in tunnels will be upgraded to provide faster and more reliable voice and data transmission. The existing wireless infrastructure was installed in 2005 but is already considered inadequate.

The four-year programme is being funded through local, state, and federal sources, and work is expected to begin next year, starting with track work before moving on to station renovations, power upgrades, and signalling improvements.

According to CTA the project is largest investment in the line since the completion of the Jefferson Park – O'Hare extension in 1983.