THE US Federal government has denied that any agreement was in place to help fund the $US 20bn Gateway programme to increase capacity on the Northeast Corridor. 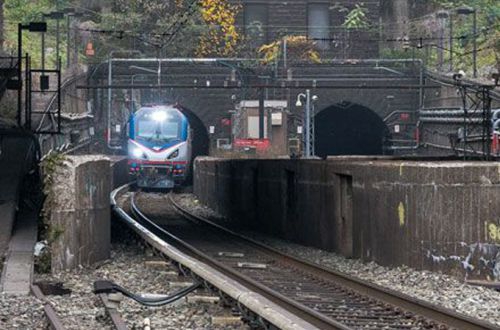 An Amtrak train exits one of the portals of the existing Hudson River tunnel linking New York and New Jersey.

The project involves constructing a second double-track tunnel beneath the Hudson River between Newark in New Jersey and Penn Station in New York City, rebuilding and replacing the damaged components of the existing North River Tunnel, and modernising infrastructure.

The deputy administrator of the US Federal Transit Administration Ms Jane Williams outlined a series of concerns regarding an updated financial plan for the Hudson Tunnel project in a letter to New York State director of budget Mr Robert Mujica on December 29. Among the issues Williams raised was that there is no 50:50 agreement between the US Department of Transportation (USDOT), New York and New Jersey.

“There is no such agreement,” Williams wrote in the letter, which was obtained by Crain’s New York Business. “We consider it unhelpful to reference a non-existent “agreement” rather than directly address the responsibility for funding a local project where nine out of 10 passengers are local transit riders.”

An agreement between USDOT, New York, and New Jersey was established in 2015 under the previous Obama Administration. Elected officials from New York and New Jersey met President Donald Trump and USDOT representatives in September to make the case for the Gateway project and called the meeting productive, but inconclusive.

Securing a financial commitment from the federal government for the Gateway project has also been used as a bargaining chip in the delayed confirmation of Mr Ronald Batory as Federal Railroad Administrator.

In his response to Williams, Mujica referenced the 2015 agreement, as well as the September meeting between administration and elected officials.

Williams also questioned the new financial plan’s move toward what she labelled as greater federal reliance. Williams said the project is now 100% dependent on federal financial assistance given that the plan calls for 50% of the funds from Federal Capital Investment Grants (CIG) and the other 50% from a trio of Railroad Rehabilitation and Improvement Financing loans. She also explains that the plan’s expectation of $US 5bn or more in CIG funds could exhaust the CIG programme completely.

Mujica responded that labelling the use of federal loan programmes to pay for infrastructure as federal assistance or federal dependency is a misinterpretation that goes “against decades of precedent when it comes to funding infrastructure projects of this scale and importance.”
Williams letter also notes that the project budget was reduced by $US 2.2bn without explanation.

“We understand this new plan does not address the rehabilitation of the existing tunnels, and now only addresses the building of two new tunnels. Given the age of the existing tunnels was the impetus for the project, we question the decision to ignore any funding commitment to that critical component, and to omit billions in other costs previously acknowledged to be part of the overall project cost,” wrote Williams.

Phase 1 of the Gateway project includes three elements: the Portal North Bridge Project, the new two-track Hudson River Tunnel and Hudson Yards Concrete Casing. At the time the updated financial plan was released, New York and New Jersey said the cost to rehabilitate the existing tunnels would be addressed in the future, as rehabilitation work on the tunnels was not expected to begin until 2026.

Williams noted that the federal government remains “open to paths that would enable” the Gateway project to proceed before concluding that infrastructure will be discussed in Congress in the coming weeks. Mujica reciprocated his department’s willingness to engage with the federal government and expressed his hope that “any national programme with the ambition to improve our infrastructure must begin with Gateway.”