THE first of four Lint 54 DMUs ordered by regional operator Vias for the Odenwald network south of Frankfurt-am-Main has emerged from Alstom’s plant in Salzgitter, Germany. 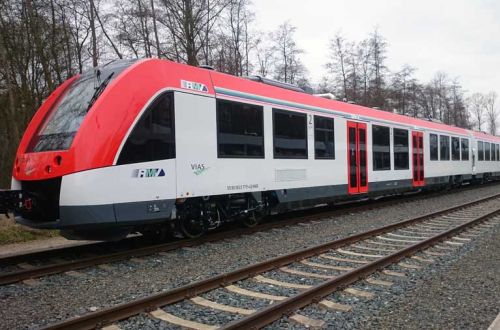 The €16m fleet will be introduced in December on Hanau - Gross Umstadt Wiebelsbach services. Each two-car set seats 165 passengers, offering 35% more seating capacity than the Bombardier class 615 Itino DMUs currently used on the route. This will release class 615s to strengthen other services.

The Odenwald network comprises the Frankfurt/Hanau - Eberbach, Darmstadt - Gross Umstadt - Erbach (Odenwald), and Darmstadt - Pfungstadt lines and is operated by Vias under a 12-year contract awarded in June 2014.

The network has witnessed a 40% increase in ridership since 2005, with growth spurred by modernisation of infrastructure and rolling stock and reduced journey times.