ALSTOM presented the first of six ETR 526 Jazz EMUs for the Autonomous province of Trento to provincial president Mr Ugo Rossi, councillor for infrastructure and the environment Mr Mauro Gilmozzi, and representatives of Trenitalia on October 21. 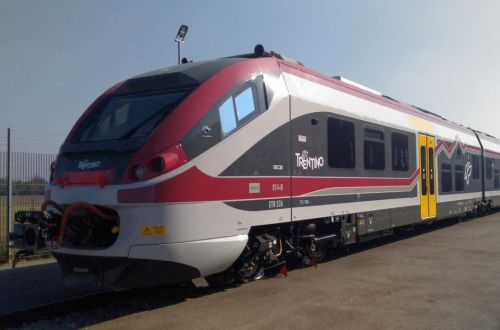 Trento awarded Trenitalia a contract in March to operate the Trento - Venice and Verona Porta Nuova - Bolzano lines for nine years from December.

The 96.9m-long six-car trains seat 326 passengers, including 42 on folding seats, with two wheelchair spaces. In addition, the train will accommodate 20 bicycles, and could be adapted to carry up to 30 bicycles in the summer season.

The trains are being built and Alstom’s Savigliano plant in northern Italy and all six sets are due to be delivered by next month.

The delivery of the first three trains for Trento takes the total number of Jazz trains supplied to Trenitalia past the 100 mark.