HE first Pop regional EMU for Trenitalia was unveiled at Alstom’s Savigliano plant in northern Italy on June 26. 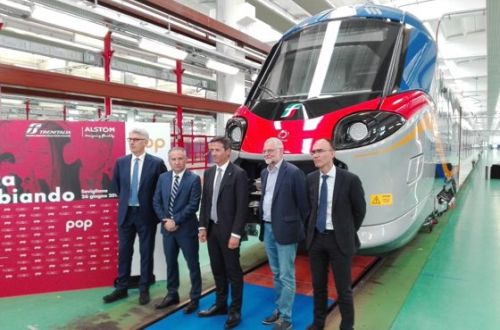 Trenitalia signed a framework contract with Alstom in August 2016 for up to 150 of the 160km/h single-deck trains, which are based on Alstom’s Coradia Stream platform, with an initial order for 27 three-car and 20 four-car trains for the region of Emilia-Romagna.

In March, Trenitalia placed a second order for 54 trains for the regions of Abruzzo, Liguria, Marche and Veneto.

Trenitalia will also order 21 sets for Sicily under an eight-year operating contract agreed with the regional government last month and Pop trains will also be ordered for the region of Puglia.

Alstom’s Savigliano site managing director Mr Davide Viale said the first train will now visit the VUZ Velim test centre in the Czech Republic and Alstom will display one of the trains at the InnoTrans exhibition in Berlin in September.

The first trains are due to enter commercial service next year.