A report by Britain's Public Accounts Committee (PAC) has criticised the Department for Transport's (DfT) handling of two major rolling stock procurement projects, arguing that the government has taken on a disproportionate share of the risk because of the DfT's failure to fully investigate other methods of financing new trains. 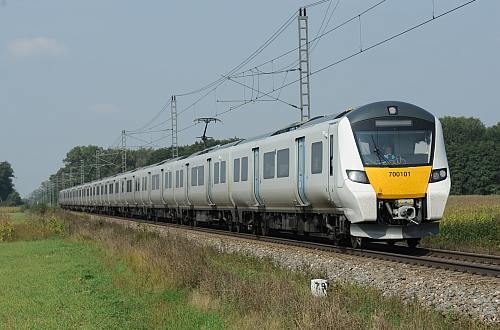 A total of 866 long-distance vehicles are being supplied by the Agility Trains consortium under the DfT's Intercity Express Programme (IEP), while Cross London Trains is supplying 1140 suburban EMU cars for the Thameslink Programme. The combined value of these two contracts is around £10.5bn.

Under both contracts, the winning bidder is responsible for financing, supplying and maintaining the rolling stock for 20 years in the case of Thameslink and 27.5 years for IEP.

Both contracts were awarded more than two-and-a-half years later than scheduled due to pauses in procurement and the difficulty in securing finance in the wake of the global economic crisis.

The report argues that the DfT's failure to articulate its role in the rail industry has led to widespread confusion, and that its role in the procurement "appears to be at odds with its previous policy of transferring responsibility for procuring trains to the industry."

The PAC says that the DfT does not appear to have considered alternative ways of achieving its objectives, such as providing train operators with appropriate incentives to finance new rolling stock.

The procurement of IEP is criticised as "poorly managed from the outset" and the PAC says the DfT started out with no clear idea of how many trains it would need, where they would operate, or what traction would be required. The decision to electrify the Great Western Main Line in 2009 led to the requirement for diesel trains being dropped.

The report highlights Agility's decision to submit a revised bid with a 38% reduction in price following a value-for-money review of IEP in 2010, and argues that this demonstrates that the DfT's oversight of the likely programme costs was weak. "The department would not have needed to cancel and rerun the procurement if Agility had not reduced its bid," the report states.

Delays in the Thameslink procurement led to the acquisition of further new trains from Bombardier as a stopgap to ensure new services could be introduced on time. It has also had a knock-on effect on the planned redeployment of older trains from the London area to newly-electrified lines in northwest England.

"The DfT's decision to buy the new trains for Intercity Express and Thameslink itself has left the taxpayer bearing all the risk," says PAC chair Mrs Margaret Hodge. "The department has no previous experience of running a procurement of this kind, let alone two with a combined value of £10.5 billion. Yet it has chosen to break with its previous approach of leaving it to rolling stock companies and train operators to buy trains, transferring risk away from the rail industry back to government. This means that if passenger forecasts are wrong and fewer new trains are needed in future taxpayers will have to pick up the bill. The only way the DfT can limit this risk is by requiring train operating companies to use these new trains to run their services regardless of whether they best fit the services they would like to offer.

The PAC warns that the DfT still lacks the skills to manage complex procurements, with frequent changes in senior management and a reliance on consultants to manage these programmes. It notes that there have been seven changes of management on the DfT's IEP team since November 2007, although proposals are "in-hand" to recruit more staff and develop commercial skills in graduate recruits.

The report recommends that the DfT should:

The report can be downloaded in full from the PAC website (PDF).