AUSTRIAN Federal Railways (ÖBB) is seeking public feedback on two more interior design studies for a new type of couchette with enclosed berths, following on from a concept revealed in February. 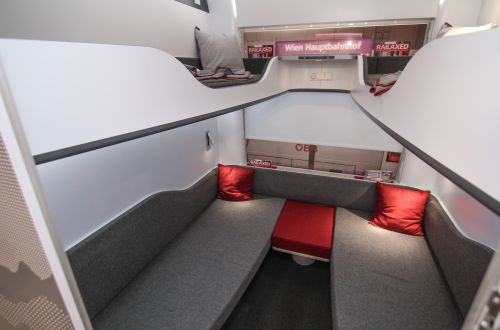 Two types of compartments designed by British design agency PriestmanGoode are on display at ÖBB headquarters in Vienna, one with two beds as a sleeping compartment and another with four berths as a couchette.

The couchette is of a more conventional design than the study presented in February. It has two 1.8m-long transverse berths on each side of the compartment, with small tables between berths on both the upper and lower levels. There is sufficient clearance between the lower and upper berths for the passenger in the lower berth to sit upright.

The compartment features power sockets, USB ports, and small storage shelves for smartphones or tablets. Luggage can be stored below the lower berths and above the corridor.

The sleeping compartment has two longitudinally-positioned beds. This gives space for two seats beneath the lower bed and a small toilet/washroom. The latter may also accommodate a small shower. As in the couchette, there are electronic features and a screen which displays train information. This is also linked to an entertainment system which provides content via an onboard server.

The designs are being evaluated for a new fleet of coaches for Nightjet services, which will enter service in 2020.