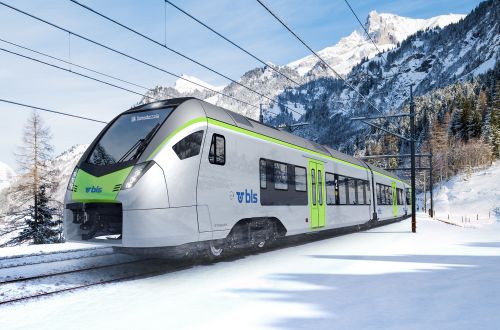 Stadler was selected as preferred bidder for the order in May 2017 and the signing of the contract follows approval of funding for the new trains by the BLS board, the cantons, and the Swiss government.

The order comprises 24 trains for RegioExpress services and 28 sets for the Berne S-Bahn network. Both variants will be 105m long and formed of six cars.

The RegioExpress trains will be used on Bern - Spiez - Zweisimmen and Brig - Domodossola services, as well as a new Bern - Burgdorf - Thun RegioExpress service. BLS had originally intended to order 30 sets of the RegioExpress variant, but now only requires 24 trains because the Bern - Neuchâtel - La Chaux de Fonds services will operate as part of the long-distance network.

A full-scale model will be built at Stadler’s Bussnang plant in the middle of this year and production of the first bodyshells will begin early next year. The first trains will be ready for mainline testing by mid-2019.

BLS expects the Flirts to enter service between 2021 and 2025, enabling the withdrawal of 43 older trains from the EW III, RBDe 565 and RBDe 566 fleets and supporting the introduction of 15-minute-interval services on the core of Bern S-Bahn network.